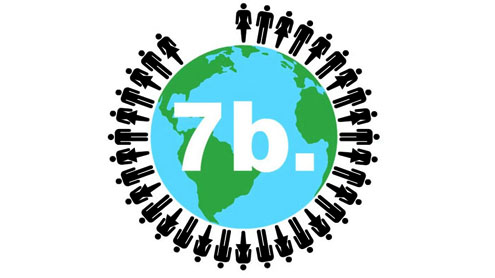 Google “population clock” and you’ll be directed to a site which displays the population of various countries, as well as the population of the entire world in real time. Births and deaths are represented by constantly changing numbers. A few days ago when I checked, there were 266 births and 108 deaths worldwide in a minute’s time. This morning the world’s total population stood at 7,515,376,584 and rising. Watching the clock can be interesting, maybe even addictive.

But are the numbers anything more than changing statistics?

Maybe not to most people, but they are to the Lord. When the Bible says, “God so loved the world,” it means just that. God’s love is so great and all-inclusive that it covers not only the 7.5 billion people alive today, but all the billions who came before and who will be born in the future. Add to that, the fact that not a single person deserves anything from God except eternal punishment, and His love proves to be all the more overwhelming. It was that love which moved God to send His Son to be the world’s Savior. It was that love which led Jesus to bear the burden of our sin and punishment on the cross. In amazement, Paul writes: “God was reconciling the world to himself in Christ, not counting men’s sins against them” (2 Cor. 5:19).

All 7.5 billion people matter to the Lord. They are not just statistics. He knows them by name. He sees their faces. He fully paid for their sins. He is not willing that any should perish, but that all should come to repentance. And because they matter to the Lord, they matter to us, who have been called out of sin and unbelief and made members of His kingdom. By faith the Spirit gives us a new attitude toward others. Instead of thinking only of ourselves, Jesus’ love moves us to see others as He sees them, as precious souls for whom He sacrificed His life.

Keep that in mind as you go through your day. It will give you a completely different perspective toward everyone from family members to the driver who took your parking spot to all the other 7.5 billion people on earth. Whoever it is, we will recognize them as someone who matters to the Lord and therefore also to us.

In tomorrow’s sermon text (Matt. 9:35-10:8), we see the Lord’s compassion toward a world of sinners during His ministry, and how He now calls us to service in His harvest field.
The Lord’s Supper will be celebrated in both services.

May the Lord bless your day,